Expanding to North America, Buro-OS presents a future vision for vertical living in one of the world’s most livable cities with a tower that reaches out horizontally to engage the space of the city and activate Vancouver’s waterfront skyline. 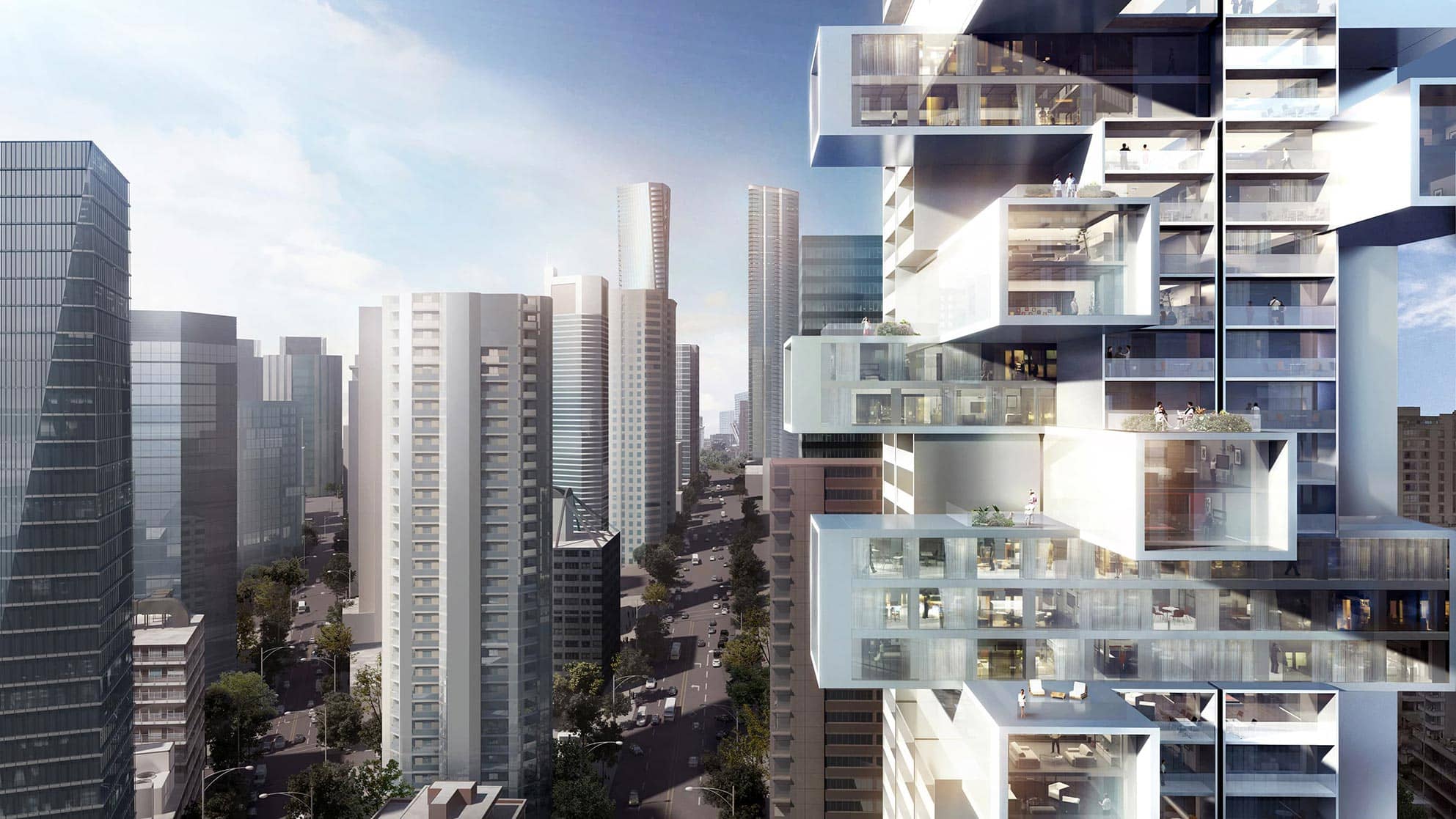 Vancouver, consistently ranked as one of the most livable cities, has much to offer: beyond a vibrant social environment, the “City of Glass” is known for its buildings of transparency and for its breathtaking surroundings of clear water and snow-covered mountains. But, like many cities today, its skyline is dominated by verticality – extrusions of generic towers that don’t engage their environment and create isolation rather than connection. Ole Scheeren’s design opens up the inert shaft of the tower to embrace both city and nature in a three-dimensional sculpture which projects the space of living outwards into the surrounding context. 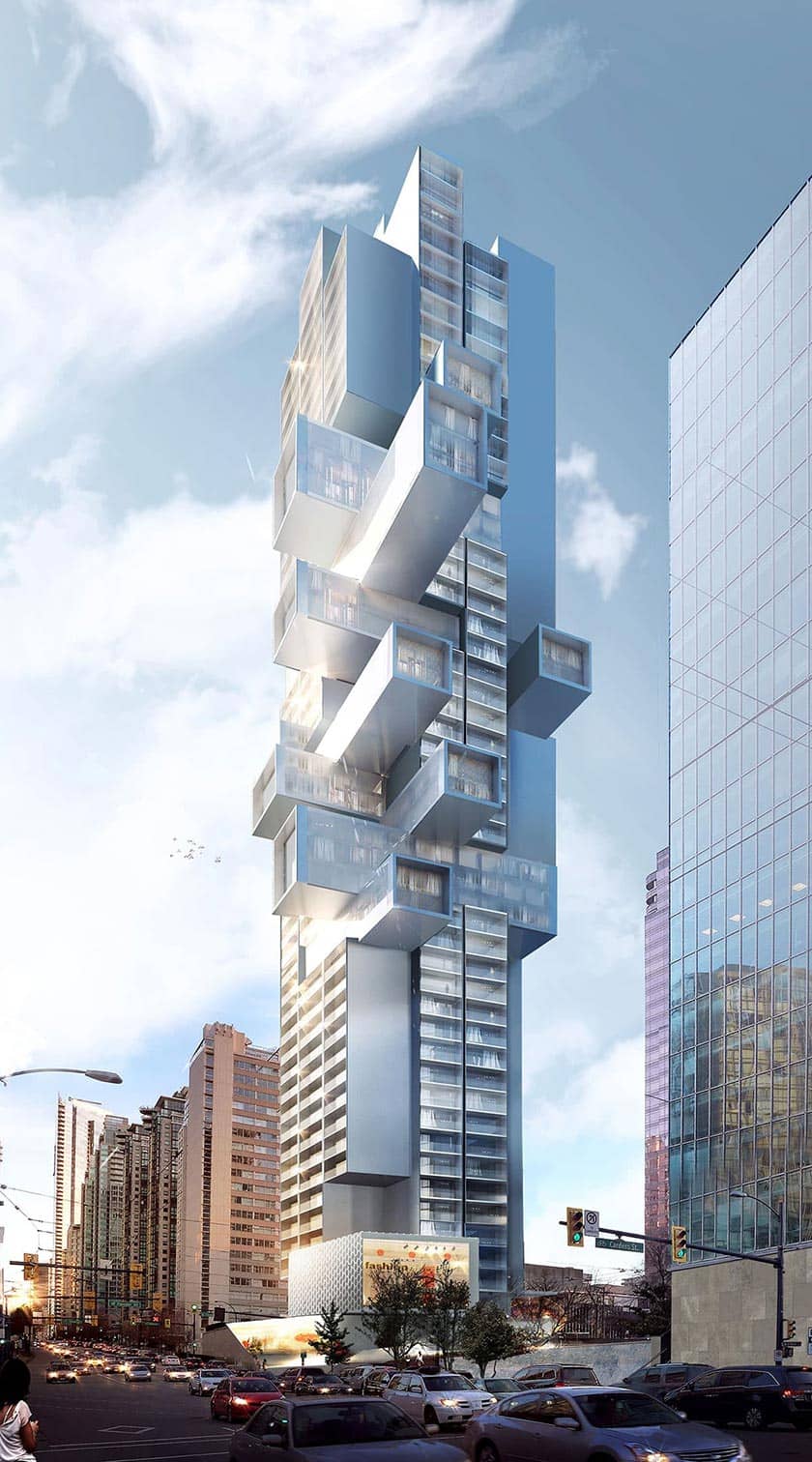 Located on 1500 West Georgia Street, one of Vancouver’s main avenues, the tower to be developed by Bosa Properties stands as a new beacon at the entrance to Vancouver from the North Shore and Stanley Park and forms an urban pivot at the junction where the city’s grid splices and begins to expand.

A system of vertically shifted apartment modules enables dynamic yet rational and efficient layouts for residential units while the horizontal rotation of these modular elements projects living spaces outwards to introduce the concept of horizontal living in a slender high-rise. The resulting multiple terraces generated from these horizontal shifts create both physical and emotional connectivity between the indoor and outdoor environment.

“Vancouver possesses a unique balance of urban conditions surrounded by spectacular nature that provides fertile ground for envisioning new possibilities for future living in a cosmopolitan and environmentally-friendly city” says Ole Scheeren. “The design for this building exemplifies our ambition to reconnect architecture with the natural and civic environment and go beyond the hermetic confines of towers that increasingly inscribe our lives.”

The vertical offset of the apartment modules minimizes the footprint of the tower and liberates the ground to provide an open public plaza for residents and citizens alike. An amplified reinterpretation of the existing water cascade along West Georgia builds on the strong architectural heritage of the site, while multiple crossing paths ensure urban permeability.

Civic amenities are embedded around the central plaza and the extensive waterscape to engage the community and contribute to the network of downtown green and public space. 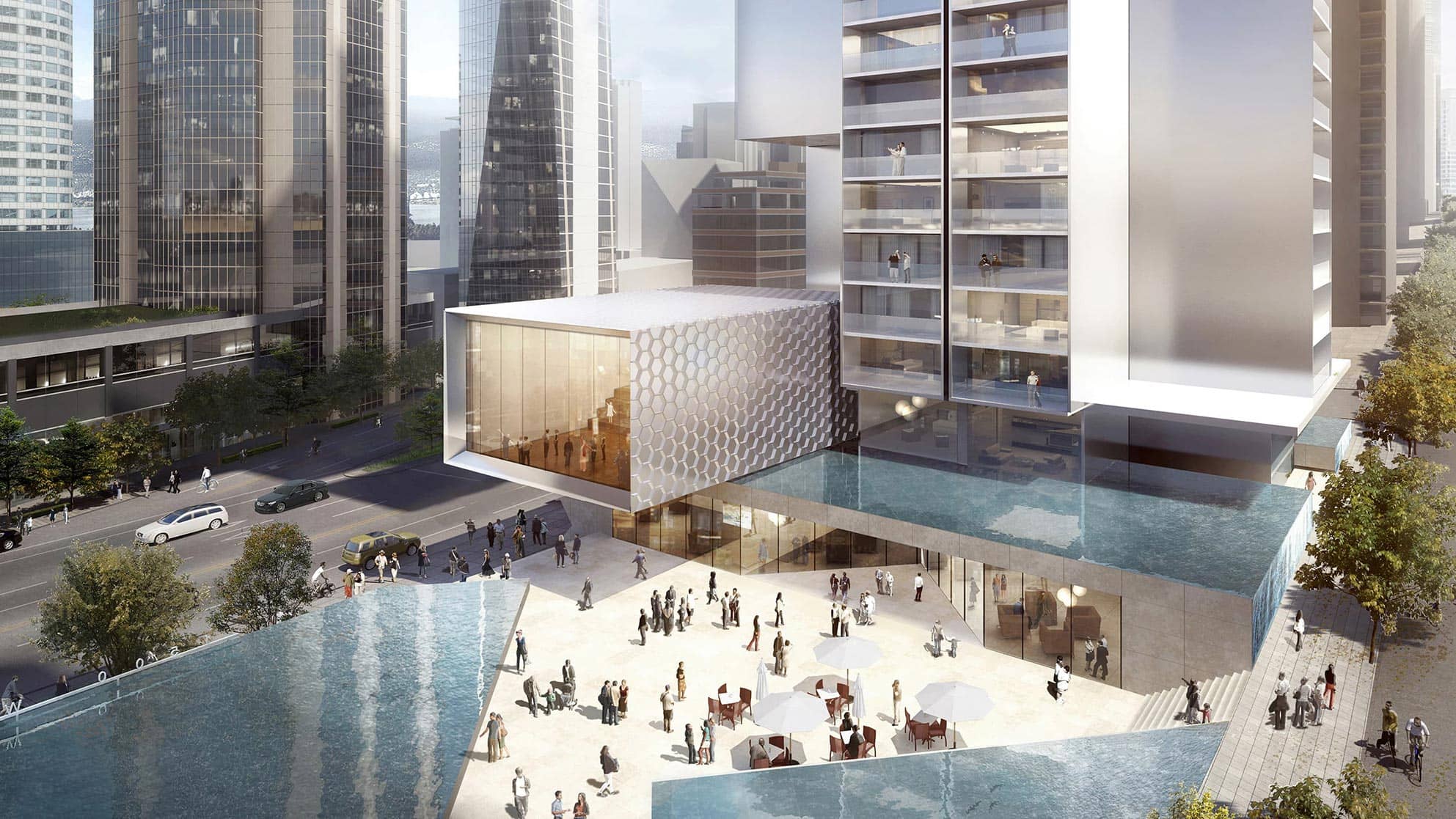 Büro Ole Scheeren, in collaboration with Francl Architecture, submitted the Letter of Inquiry today to the City of Vancouver outlining Bosa Properties’ plan to redevelop this important site at 1500 West Georgia Street.

“At Bosa Properties, we are always striving to innovate, and we’re excited to have found in Ole Scheeren an architect who shares this passion. With this project we’re hoping to introduce an entirely new form of vertical high-rise living, and a tower that forever changes the conventions of the aesthetics and performance of residential high-rise towers” says Colin Bosa, CEO of Bosa Properties.

“We’re excited to participate, along with our partners at Bosa, in a tower that seeks to redefine high-rise architecture and urban living. And to redefine it in a meaningful, provocative, and thoughtful way right here in Vancouver”, adds Lorne Segal, President of Kingswood Properties.

“This is a special place in the City for Vancouverites who have fond memories of Rhone and Iredale Architects’ much admired existing office building and water cascade. Both are being retained and enhanced by a design that respects the original character, while at the same time re-interpreting the space in a contemporary way, offering much improved public access and openness” says Stefan Aepli of Francl Architecture.

Sustainability strategies for passive and active energy savings are integrated with the architecture to target significant reductions in energy consumption and aspire to achieve LEED Platinum. Renewable energy sources at the top of the building’s sculpted crown generate 100% of the energy for the public amenities at the ground, creating a new model that visualizes sustainability and gives carbon-free space back to the public.

Commissioned in early 2015, 1500 West Georgia further expands Büro Ole Scheeren’s growing international portfolio. The practice is working on a range of city-defining structures and cultural projects, ranging from more intimate spaces to large-scale urban developments in several of Asia’s capitals, with Mahanakhon, Bangkok’s tallest tower; DUO, a mixed-use development in Singapore, and the Guardian Art Center near the Forbidden City in Beijing. 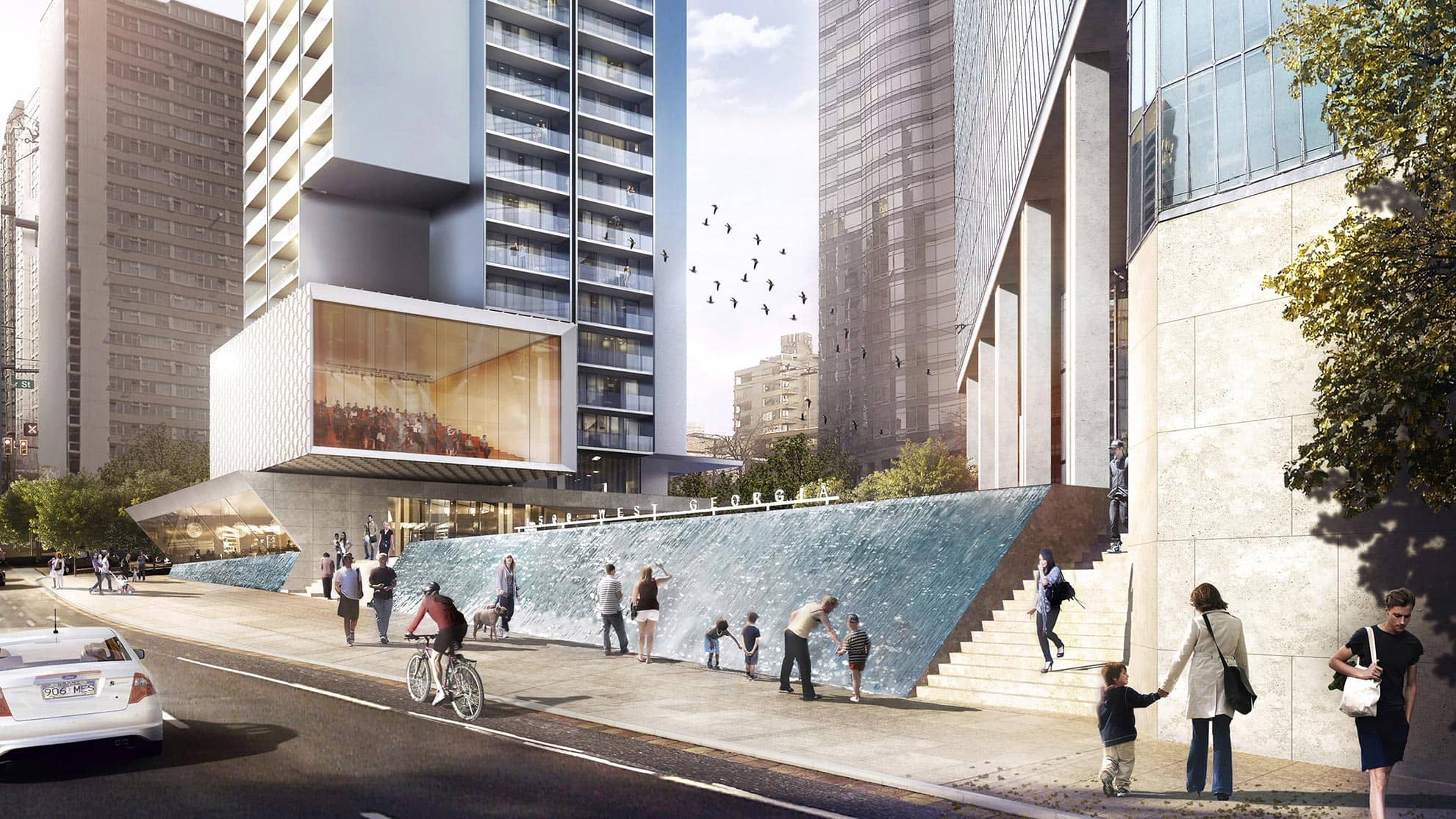